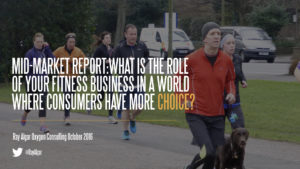 During October I was invited to Chicago to give a talk to an audience of American health club operators. My talk was discussing themes from my recent Health Club Industry Mid-market report.

This was my first time attending the event and all was positive apart from the idea of running seven simultaneous talks which I felt was too many. I would have also liked to have seen more CEO’s in the audience but many were occupied in a separate one-day event. However, my audience seemed very engaged and we had a stimulating discussion following my sixty minute talk. It was also good to catch up with Joe Cirulli, CEO, Gainesville Health and Fitness Center who was discussing the role of culture in high performing businesses. Steve Tharrett of ClubIntel also gave an excellent session on his research into the US boutique studio segment.