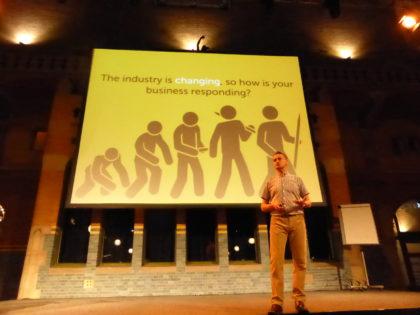 Recently I was contacted by Patricia Amend, Executive Editor of IHRSA’s Club Business International (CBI) magazine. The magazine has a regular section which features interviews with people connected to the health and fitness industry. Here are the questions Pat put to me:

I split my time between consulting assignments and research. The research side of my business began in earnest six years ago when I began tracking the emergence of the low-cost gym sector in Europe. I was attending conferences and the conversation would turn to low-cost or budget gyms. I saw that people had some understanding of these disruptive new entrants, but were missing real depth that would help them to form a robust strategic response. So I spent three months producing the industry’s first strategic report. Although the report focused on the UK market it spread globally after publication. It helped to clarify my positioning as a forward-looking strategic researcher helping the industry to understand threats and embrace opportunities. I have since published six reports spanning low-cost gyms, social media and corporate social responsibility.

How can the ordinary club owner use research in their day-to-day operations?

First let’s re-package the idea of ‘research’ as something that is owned and driven by one person or department and think of it in terms of how everyone connected to the business is ‘paying attention’ to how the club remains relevant to its members. This may require a change in mind-set because you have to observe how your club fits into a fast-changing world. So by all means walk the gym, but also remember to jump onto the web, expand your network and broaden your horizon.

In 2011, you released the European Health Club Industry Web and Social Media Report. How has social media changed since then?

I wrote the report to highlight the transformational effect that I believed the new social web would have on the industry. The report was driven by the fact that the industry did not seem to be cognizant to the size of the opportunity. I looked at 50 of Europe’s leading club operators across 10 countries and was surprised by what I found. Websites offered little or no user generated content and it was not widely possible to book services, join online or allow members to administer their own accounts. Only two of the 50 brands were blogging, while McFit in Germany had the most Facebook fans, at just 7,600, even though it was approaching one million members. Also, the potential of Twitter was not being harnessed. However, during 2012 I saw a big change in digital adoption as fitness brands began to strategically embrace social networks, so now club owners were paying attention.

When you spoke at the 14th Annual IHRSA European Congress, you said that the nature of competition is changing. How so? Is that true for the U.S. as well as Europe?

A few years back, Kjell Nordstrom, the Swedish economist introduced me to the concept of a ‘temporary monopoly’. It describes a moment in time when a business is in the ‘sweet spot’; customers love what it stands for, it is making above-normal profits and competitors cannot make inroads. This describes the health club industry, perhaps 15 years ago. However, the clue resides in the word ‘temporary’. Now the world is very different and customers have numerous ways to ‘consume’ fitness, the health club being just one solution. Every club operator know who they directly compete with, but pay less attention to substitutes. For example, in the UK some former soldiers offered their first outdoor class in a London park 13 years ago – just three people turned up. British Military Fitness now employs 800 instructors, has 15,000 members and operates from 130 parks. Customers pay around $78 per month to exercise in the rain and be shouted at by a former soldier. Substitutes do not look like a direct competitor so can be overlooked or dismissed. However, they are a classic ‘salami-slicer’ – potentially enticing away a noticeable cohort of members. A few years back, Frank Napolitano, President of 24 Hour Fitness and myself were presenting together in Spain and Frank drew on the blackboard a full-service general club slowly being ‘salami-sliced’ by an array of ‘under the radar’ specialists. It was a powerful insight that really grabbed my attention. And yes, I believe a changing competitive landscape is a global phenomenon.

You are publishing a report on boutique studios. Tell us about the report and what larger, complex clubs can learn from boutique operators?

During 2012, there was a flurry of boutique studios opening in London and I wanted to understand what was driving their growth. Whilst the industry attention was focused on low-cost gyms and a fight over who could offer the lowest price, specialist studios were opening such as ‘Psycle’ (psyclelondon.com) charging $31 for a 45-minute class. My report investigates how they compete to attract and retain customers. Their strategy has similarities with low-cost operators in the sense that they use a narrow activity specialization as a way to create a deep expertise. By eliminating a membership model they create a more customer-centered experience because the team understand they have to deliver a remarkable experience every class, because buying a second class is driven by experience of the first. Everyone can learn from them, regardless of the size of their business.

You’ve also become the industry’s “angel,” by founding, Gymtopia, an organization which encourages social responsibility among clubs. What’s the extent of it today? How and why should clubs get involved?

Health clubs have an altruistic purpose, which means they exist to help others. They are in the ‘business’ of helping others to find and reach a more contented and ‘happier’ place in their lives. So to harness this expertise and influence to help a community beyond its immediate members is just common sense on a journey to building a remarkable and sustainable business. Club owners who are taking a long-view recognise that generosity can be a powerful weapon in competing with others. Franco’s Athletic Club in Louisiana uses generosity to build remarkable connections with its community. So I created Gymtopia to shine a light on those fitness organisations leading extraordinary philanthropic social impact projects. To date, Gymtopia has published projects from 19 countries, spanning five continents. We need many more so I would encourage IHRSA members to tell their own story by visiting Gymtopia.

Finally, on a personal level, where does your passion for community service come from?

Adam Grant, a Wharton Business School Professor, recently published a great book called ‘Give and Take’. Grant describes people’s preferences for reciprocity – their desired mix of taking and giving. He describes those that travel through life and predominantly ‘take’ in their exchanges with others, those that ‘give’ and those that ‘match’ or trade.  I’ve always intuitively been a ‘giver’ for the simple reason; it just feels better.

The published interview appeared in CBI magazine in February 2015 (page 33). A digital version of the magazine can be downloaded at this link.