Gymtopia – a place where clubs do social good 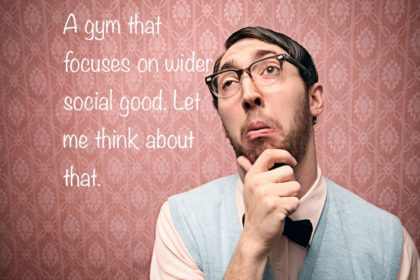 What I love about this globally connected world in which we now live and work is that our ability to influence and make an impact is dramatically amplified. Never have we been able to reach out to more people. However, when we reach out, do we give or take? Some industries have a reputation for being ‘net takers’. What do I mean by a ‘net taker’. Simply, that over the course of time, they are perceived as taking more from the communities they operate in, than they give back. This can create ‘tension’ and a growing sense of disconnection with communities. Being labelled a ‘net taker’ is not good for an organisation or an entire industry as it is a label that is hard to shrug off. For example, no matter what energy companies such as BP, Chevron and Shell do by way of socially responsible activities, for many it will never be seen as good enough.

Is your club a ‘net giver’?

This got me thinking about health and fitness clubs and the way in which they are perceived by their own community. Is the local health club seen as a ‘net giver’ or ‘net taker’? The Club owner would emphatically say ‘net giver’ but the collective view of the community is what really matters. So how does a health club communicate its ‘giving’ credentials? I believe one way is by looking at its social impact activities.

What is a social impact activity?

I see this as an externally focused activity with the objective to create a local, national or global social impact. Activities or initiatives can be typically captured in causes such as:

Recently, I was attending the IHRSA Fitness Brasil Conference in Sao Paulo. I was giving a presentation entitled: ‘ What is the core purpose of your club and what does it stand for?’ You can read the presentation at this link.

During the presentation, we discussed a series of remarkable businesses. Remarkable because they create great products that customers love, but in ways that are socially innovative. One business we looked at was TOMS shoes. TOMS is a unique shoe company set up by Blake Mycoskie in 2006. Blake was travelling in Argentina when he noticed many children without shoes. Shoes really matter because they prevent disease and injury and allow kids to walk the many miles to attend school. So he decided to create a shoe business in the United States that would match every pair of shoes purchased with a pair of new shoes given to a child in need. It was a new kind of business model called ‘one for one’; we sell a pair, we donate a pair. So how did this twenty-something entrepreneur with no knowledge of the shoe business do? Well, TOMS shoes donated 10,000 pairs of new shoes by the end of their first year and as I write, they have now donated 2 million pairs. By way of explanation, there is no ‘Tom’ at TOMS shoes; it means ‘tomorrow shoes’.

Following my presentation, I began talking to Richard Bilton, President of Companhia Athletica, one of Brasil’s leading health club chains. Richard was telling me about a shoe collection project their clubs had started. The simple idea was to ask members to bring in their old gym shoes when they were about to replace them. The shoes were laundered, bagged and passed to Symap, a Brasilian charity providing running training to individuals who could not affords to buy specialist training shoes. The curious part of this story, was that the laundered shoes were first hung in the reception area of the clubs. Picture the image of walking into your local club reception and seeing dozens of pairs of shoes suspended from the ceiling. Companhia Athletica collected 700 pairs of shoes to kick-start the project and is now collecting just under 4,000 pairs each year.  I was fascinated by Richard’s project for several reasons:

So the idea I had that day was to curate all these stories and put them in a single place on the web so that they became more ‘discoverable’. I drafted a discussion paper and circulated it first to Guillermo Velez, Editor of Mercado Fitness Magazine in Argentina. Guillermo attended my Brasilian presentation and understood the project’s big idea. His feedback was very encouraging and so I decided to develop my own ‘social impact project’. I began kicking around names in my head such as: ‘Moving for good’, ‘Clubs with purpose’, ‘Clubs with heart’, ‘Clubs with soul’ and ‘Clubs that care’. In the end, I choose none of these, but instead have called my new project ‘Gymtopia’. Perhaps Gymtopia describes the perfect gym, a place where remarkable things take place, both inside and outside of the club.

Gymtopia is now being developed with financial support from five companies who have the foresight to see what this project is seeking to achieve. They are:

I now have around 30 social impact projects that provides the initial content for Gymtopia when the website launches at the beginning of April 2013. The projects describe how clubs are collecting toys for disadvantaged children in Latin America, funding clean water projects in Africa, donating food to single mothers in Europe and financing medical research in North America. But, this is just the beginning because we want to collect hundreds of case studies.

You can get involved

Your club can get involved right now in the following ways:

Why should I care?

Some of you may be reading this and thinking that we need to focus on what is going on inside the walls of our club. You do, but we also need to stay synchronised with our customers who are increasingly becoming ‘compassionate consumers’ who themselves want to be seen as ‘net givers’.