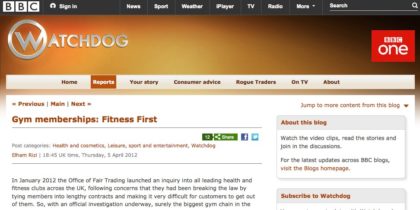 I watched the programme several times and was left wondering why the Watchdog team love to regularly feature the UK health club industry. Last night the programme found examples of mis-selling and other dysfunctional sales practices. This is what the team found at a cross-section of Fitness First clubs:

‘We sent two researchers to ten branches of Fitness First around the UK to find out just how upfront Fitness First staff are about the contractual small print. In turns out they weren’t very upfront at all.

None of the staff at any of the ten branches we visited offered to show us the terms and conditions. The only times we did see them were when we asked for them. At the Hammersmith branch in London we were even told by a Fitness First employee that the terms and conditions didn’t exist, however, he did eventually produce them but only gave us 33 seconds to read 2,295 words.

Incredibly, in five of the branches we visited, staff even ticked the box on our behalf certifying that we had read the terms and conditions, even though we hadn’t. In two branches they told us that they would send the contract to us – but only after we had signed up.”

Sales staff seemed to lack belief that the club could deliver long-term value to the member which meant discussions about the contract were inconsistent and opaque.

Well done to Chris Stone, the newly appointed Fitness First CEO who accepted the BBC’s invitation to appear on the programme. This is what he had to say:

Fitness First has since issued a statement in which it says:

‘We can assure you that we take all feedback that we receive very seriously and are determined to address it. Since Watchdog has highlighted these cases, we have acted promptly to address each of these complaints and have contacted all members to rectify their situations.’

This is what I know for sure; the Watchdog team will be returning and I just hope that next time they look, that they find a better and more customer-centric business.